The money of five emperors generally refers to the money of five emperors in Qing Dynasty. It is the ancient money cast by the five most prosperous emperors of Qing Dynasty (Shunzhi, Kangxi, Yongzheng, Qianlong and Jiaqing). The five emperors have been in power for 180 years, which is the most brilliant period of the Qing Dynasty. During the reign, the national power was strong, and the famous "prosperous period of Kang and Qian" appeared in history. The five emperors' money has a history of about 300 years. It is made of brass and is yellow in color. It is widely handed down and handed down in large quantities by the hands of thousands of people. 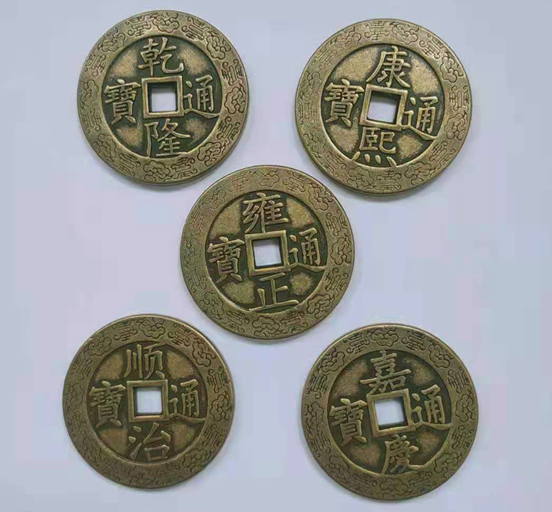 Tongbao of Qianlong was the currency of Qianlong period (1736-1795). During the 60 years of Emperor Qianlong's reign, he carried out his strategy of "governing the country with culture and martial arts", which created the last glorious era in the feudal society. Later, it was widely said that wearing "Qianlong Tongbao" copper coins could drive away disasters and evil spirits. Because of the homonym "Qianlong", it was loved by later collectors. The casting technology of Qianlong Tongbao is excellent, which lays the foundation for the important position of the ancient coins in the future coin collection. It not only reflects the economic development degree of the era, but also shows the extremely exquisite casting technology of the historical period, which has a profound historical research significance. 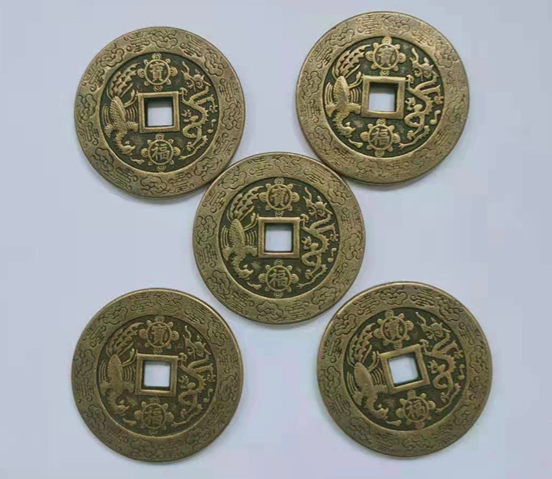 Jiaqing Tongbao was cast in the reign of zongjiaqing. During Jiaqing period, some regular articles appeared, such as Jiaqing Wanshou regular big money, with two styles of light back and back superstar, which may have been cast in Southwest China. According to the money making since the early Qing Dynasty, there was no emphasis on calligraphy, but Xiaoping of jiaqingbao Guizhou bureau had a kind of regular , which was neat and fresh. In Jiaqing, there are also cursive money texts on the back of money, such as GuiGui, Kangkang and Shoushou on the back of Tongbao in Jiaqing, all of which are right regular and left cursive, which are also estimated to be palace money.

Kangxi Tongbao, coins of Qing Dynasty. It was cast in the reign of Emperor Kangxi. According to the characters on the back, Kangxi Tongbao can be divided into two categories: one is the Manchu money imitating the four types of Shunzhi. Qian Beiman's left reading of "Baoquan" and "Baoyuan" is made by the household and the industry. The other is to imitate "Shunzhi five styles" in Chinese. Kangxi Tongbao has Xiaoping and ten big money. In addition to Baoyuan and Baoquan bureaus, all provinces are named after the Bureau of Manchu characters, with Manchu characters on the left and Chinese characters on the right. All the money cast in each province is Xiaoping. The ten large coins were cast by Baoyuan Bureau. The face text was separated from Guo's wheel, and the back full of Baoyuan was arranged around.

The appearance is used to indicate the intactness of the collection. As a kind of collection, ancient money also has its own evaluation standard. These five coins, all of which can be rated as beautiful ones, are round in color and well preserved, which is really rare.

In the process of historical change, the five emperors' money, which can be preserved properly and with good quality at the same time, is also less and less. Even if there is one, it is also collected by many people as a private product. Therefore, the price of the five emperors' money that can be circulated in the market is soaring.